Back in December I was did some fuzzing of dnsmasq. I'm using it quite often for test setups and for a "self-built" Pi-Hole on my local network which blocks ads and tracking, too.

Before I started my own fuzzing attempts, I read this article about dnsmasq fuzzing. The guy there fuzzed the network parsing code of dnsmasq, but in order to do that, he had to adapt the dnsmasq source code. I wanted to start easy and decided to start with something less promising: fuzzing of the configuration file parsing code.

The downside is that this approach can only find bugs which are not actual security vulnerabilities. The reason is simple: The configuration file is only parsed once at the start of the dnsmasq process and manipulating the configuration file is in all (common) scenarios out-of-control for an attacker. But hey, it doesn't take long to set up this fuzzing, so let's do it:

I did not expect any findings for this very simple approach, because I assumed someone else would have done it before. It was already late in the evening by now, so I left it running on my laptop and went to bed and then to work. 20 hours later I returned and, and was surprised that it found 12 unique crashes! 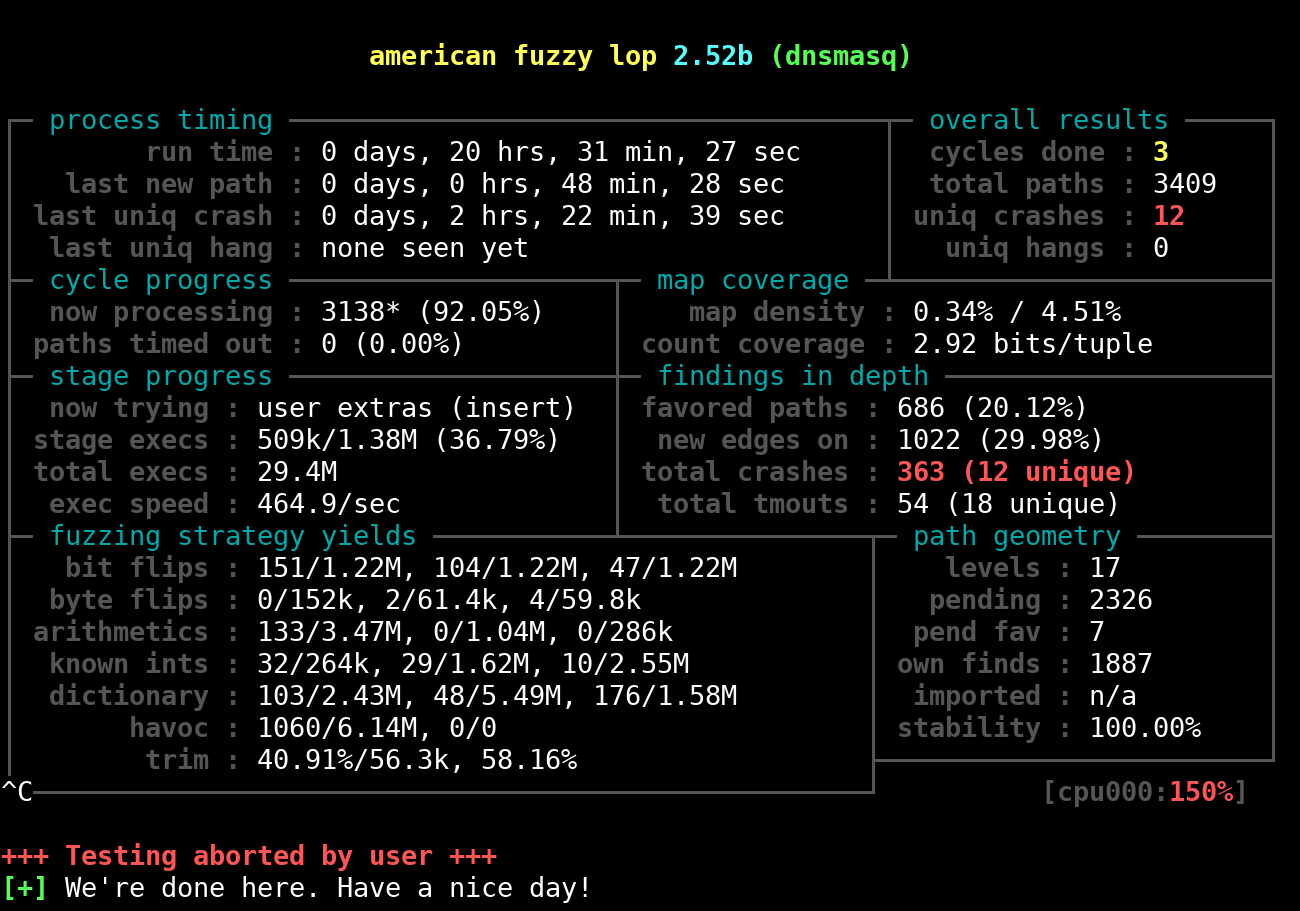 Three complete cycles were already done, so I did not expect any more crashes by now. I stopped it with Ctrl+C and started analyzing the crashes. It turned out that all of the twelve crashes had one of two distinct root causes. One error occured while parsing the dhcp-match commandline option and the other while parsing the MAC address in the ``dhcp-mac``` option.

The crashing config file which was found by afl-fuzz looked like this:

This crash was very easy to minimize by hand and the root cause was a NULL pointer dereference.

The crashing config file which was found by afl-fuzz looked like this:

This crash was very easy to reproduce and minimize by hand, too:

The error message malloc(): invalid next size (unsorted) indicates that internal glibc metadata on the heap was overwritten by some faulty code but the program did not crash immediately. Instead it crashed at some later point in time when another malloc or free operation was attempted. In order to find the root cause for this, I built dnsmasq again with Address Sanitizer (-fsanitize=address) and then ran it again:

I found two bugs in configuration file parsing of dnsmasq with almost zero effort. Both are fixed and are rather an annoyance and certainly not security relevant.

Nevertheless, I think the bug per time invested-ratio for the two bugs was pretty good, because the actual fuzzing was set up in less than 20min. Writing this blog post took probably more time than actually finding, analyzing and reporting the two bugs :)